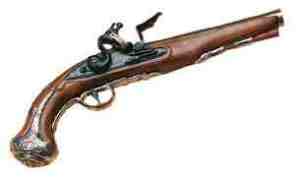 George Washington was a warrior before he became the Commander-in-Chief of the Continental Army, a statesman that helped fashion the Constitution, and the first President of the United States.  He wrote in support of firearms:  “The very atmosphere of firearms anywhere and everywhere restrains evil interference – they deserve a place of honor with all that’s good.”  His favorite weapon was this decorative flintlock pistol with embossed wood and metal grips is 13.5″ long and weighs 1.2 lbs.

George Washington wore this simple hanger sword as his battle sword while serving as commander of the Continental Army during the Revolutionary War.  The sword has a slightly curved, grooved forged steel blade, a silver mounted cross guard and pommel, and a green ivory grip.  The scabbard was leather with silver trim. The dimensions were: 3.5″ H x 36.25″ W x 1.25″ D.  It was made in Fishkill, New York by John Bailey, an immigrant cutler from Sheffield, England. The sword was inherited by Washington’s nephew, Samuel T. Washington, an army captain.  Samuel’s son donated the sword to the United States government in 1843.  It is housed at the National Museum of American History, Smithsonian Institution, Behring Center.

According to Washington’s will, his swords were bequeathed “To each of my Nephews, William Augustine Washington, George Lewis, George Steptoe Washington, Bushrod Washington, & Samuel Washington, I give one of the Swords or Cutteaux of which I may die possessed; and they are to chuse in the order they are named. These swords are accompanied with an injunction not to unsheath them for the purpose of shedding blood, except it be for self defence, or in defence of their Country & its rights; and in the latter case, to keep them unsheathed, and prefer falling with them in their hands, to the relinquishment thereof.”