The Eruption of Vesuvius in 79 AD 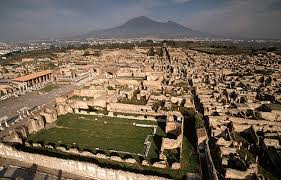 Mount Vesuvius is one of a line of volcanos where two tectonic plates (African and Eurasian) collide. The others volcanos along the plate are either extinct or haven’t erupted variously in tens of thousands or hundreds of years. Vesuvius in the only volcano to have erupted on mainland Europe for several centuries.

The 79 AD eruption that destroyed Pompeii and Herculaneum was described by Pliny (a Roman lawyer, author, and civil magistrate) in two letters to the historian Tacitus which have survived for almost two thousand years. Because of his thorough descriptions, the explosive eruption at Vesuvius is termed a “Plinian eruption.” According to Pliny, Vesuvius ejected a cloud of stones, ash and fumes about twenty miles high. The molten rock and pumice released was a hundred thousand times the thermal energy of the atomic bomb at Hiroshima.

An estimated 16,000 people died due to pyroclastic flows which are fast-moving currents of hot gas and rock (1800+° F) which can flow downhill at speed up to 450 mph. Today, Because of its location and  explosive eruptions, Vesuvius is considered one of the most dangerous volcanoes in the world. The area is the most densely populated volcanic region in the world with 3,000,000 people living in nearby Naples and the surrounding areas.

Tomorrow, One of Pliny’s Letters on the eruption of Vesuvius.

Mount Vesuvius, the volcano that destroyed Pompeii and Herculaneum in 79 AD,  is located close to Naples, Italy. It has a large cone created by the eruption in 79 AD that is surrounded by a steep caldera which is a cauldron-like cavity created by the collapse of an earlier, higher structure – Monte Somma about 18,000 years ago.

Vesuvius was formed as a result of the collision of the African and Eurasian tectonic plates. A chain a volcanos, most of which are underwater and extinct was formed when the African slid underneath the Eurasian plate. The mountain is composed of lava, volcanic ash, and pumice. Prior to 79 AD Vesuvius was a pastoral haven that was planted with vineyards that produced a popular wine shipped around the Roman world.

The slopes of the mountain are scarred by lava flows but are heavily vegetated, with scrub and forest at higher altitudes and vineyards lower down. Vesuvius is as an active volcano which last erupted in 1944 during World War II. , although its current activity produces little more than steam from vents at the bottom of the crater.