Tag Archives: So You Think You Know English

Author Gordon Osmond  is today’s guest at An Author’s Desk. Gordon is a multi-genre writer of humor, non-fiction, instructional, autobiography, and contemporary American fiction. He is published with Secret Cravings Publishing and America Star Books.

“After moving to Brazil five years ago, four of my books have been written and published. I’m retired and very well taken care of by a domestic companion whom I married last year under Brazilian law; therefore, I can dedicate all of my working hours to writing books and book reviews for Bookpleasures.com and Bookideas.com and teaching English as a Second Language.”

“My book, So You Think You Know English—a Guide to English for Those Who Think They Don’t Need One is a humorous take on the essentials of English, grammar, spelling, and punctuation.

Wet Firecrackers—the Unauthorized Autobiography of Gordon Osmond is a tell-all book which cost me the friendship of many friends and family members.

My two novels, Slipping on Stardust and Turner’s Point are described below. 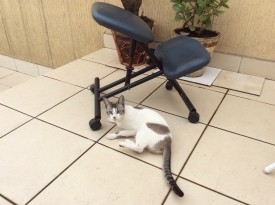 When writing a book, as contrasted with correspondence and social and political blogging, I write in cursive, usually in a bucolic outdoor setting furnished with instrumental music and light alcohol. I then turn to the computer for transcription and editing. My computer desk is unremarkable, but my chair is a miracle. I have always used the same ergonomic chair, which involves kneeling rather than sitting. As I am not a churchgoer, the chair fulfills my kneeling needs. Because of hours, days, and years with this chair, I’ve never experienced a moment of back, neck, or shoulder pain.

As I have written both fiction and non-fiction books as well as eight full-length produced stage plays in genres from drama to serious comedy to farce to futuristic horror, I am looking for something new. It’s not easy.”

The reasons for the explosion of the Brockway marriage are folded into the narrative of Turner’s Point, making it a stand-alone novel. Those reasons are explored in detail and in real time in my debut novel, Slipping on Stardust, published by Secret Cravings Publishing in 2013, which is available at the same online booksellers as Turner’s Point.

Turner’s Point follows the fallout from the explosion of the marriage of Dan and Eileen Brockway. Specifically:

In addition to San Diego, Hollywood, and Johnson, the story travels to the world of Wall Street lawyers and media personalities in New York City.

Filed under An Author's Desk