The Fishbourne Roman villa is located in the village of Fishbourne in West Essex in Britain. The large villa which was built in the 1st century AD (not long after the Romans secured the area) is a rectangular structure surrounded by formal gardens.  There were extensive alterations in the 2nd and 3rd centuries, with many of the original black and white mosaics being overlaid with more sophisticated coloured work, including the perfectly preserved dolphin mosaic in the north wing. 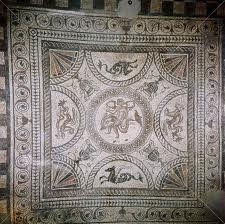 The structure burned in 270 and was abandoned.  The villa was excavated in 1960 when it was uncovered by workmen working on a water main. Fishbourne is the largest Roman residence known north of the Alps. 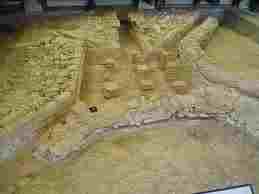 The villa had four large wings with colonnaded fronts, forming a square around a formal garden. The north and east wings had suites of rooms built around courtyards, with a monumental entrance in the middle of the east wing. In the north-east corner was an aisled assembly hall. The west wing contained state rooms, a large ceremonial reception room, and a gallery. The south wing contained the owner’s private apartments. The palace had about 50 mosaic floors, under-floor central heating and a bathhouse.  The original owner/builder of the villa that was used for more than two centuries may have been a local ruler.