The US Space Shuttle Fleet

The Space Shuttle program was developed by NASA to provide reusable space vehicles capable of going into low Earth orbit, docking with the International Space Station, and returning to Earth.  The development of the Space Transportation System (the Shuttle’s official name) was critical to the building of the Space Station.  Program development started in the late 1960s.  The program operated from the April, 1981 launch of the Columbia until July, 2011 with the landing of the Atlantis. 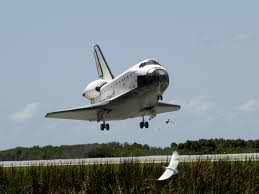 The Space Shuttle orbiter launched vertically with a crew of four to seven and a payload of up to 50,000 pounds. Its missions involved carrying large payloads to various orbits (including segments to be added to the International Space Station), provided crew rotation for the International Space Station, and performing service missions. When its mission was complete, the shuttle re-entered the Earth’s atmosphere. During descent and landing the orbiter acted as a re-entry vehicle and a glider.  The five vehicles—Columbia, Challenger, Endeavour, Atlantis, and Discovery—flew a total of 135 flights.  Each vehicle was designed for 100 launches—a 10-year operational life.  More later.