It is a common myth that an earthworm becomes two worms when cut in half. When most earthworms are bisected, only the front half of the worm (where the mouth is located) can survive, while the other half dies.

According to urban myth, the daddy longlegs spider is the most venomous spider in the world, but the shape of their mandibles leaves them unable to bite humans, rendering them harmless to our species. In reality, they can indeed pierce human skin, though the tiny amount of venom they carry causes only a mild burning sensation for a few seconds.[

The flight mechanism and aerodynamics of the bumblebee are well understood, in spite of the urban legend that calculations show that they should not be able to fly. In fact, an entomologist in the 1930s proposed the hypothesis based on flawed data.

Tomorrow, Misconceptions about Washington, the Revolution and the Constitution     Rita Bay

French Queen Marie Antoinette did not actually say “let them eat cake” when she heard that the French peasants were starving due to a shortage of bread. The phrase was first published in Rousseau’s Confessions when Marie was only 10 years old and most scholars believe that Rousseau coined it himself.

The Italian explorer Marco Polo did not import pasta from China. He described a food similar to “lagana” in his Travels, but he uses a term with which he was already familiar. Pasta was introduced by Arabs from Libya, during their conquest  in their conquest of Sicily  the late 7th century.

Columbus did not discover America. Most of his writings show he thought he reached the eastern coast of Asia. America was named after Amerigo Vespucci. Columbus was also not the first European to visit the Americas, being preceded at least by Leif Ericson. 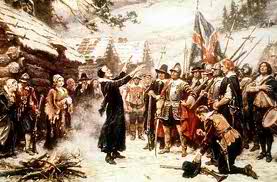 The early settlers of the Plymouth Colony in Plymouth, Massachusetts did not wear all black, or tall hat with a buckle on it. Pilgrims also wore a range of colors including reds, yellows, purples and greens. Instead, they wore the late Elizabethan era: doublets, jerkins and ruffs, with short and round hats. Both men and women wore the same style of shoes, stockings, capes, coats and hats.