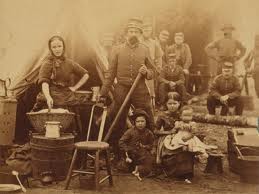 During the Civil War, food had to be cooked, laundry had to be washed, and shelter of some sort built. Few families accompanied the soldiers. (Pic credit: Library of Congress) Tomorrow, More Brady Pics. Rita Bay

Health care during the Civil War was very iffy. Antibiotics were not invented until the 20th century. Infection was a frequent cause of deaths of wounded soldiers. While care on the battlefield was inadequate. the formal hospitals were often crowded and unsanitary. (Pic credit: Library of Congress)  Tomorrow, More pics.  Rita Bay

Mathew B. Brady (1822 – 1896) was one of the most famous American photographers. He was known for his portraits of celebrities and his documentation of the American Civil War. He is credited with being the father of photojournalism. Brady employed a team of assistants who traveled the country to capture the war. They produced more than 10,000 images of the conflict, and brought the gruesome realities of warfare home to the American public. When people discourage him, citing battlefield dangers and financial risks, but Brady persisted. He later said, “I had to go. A spirit in my feet said ‘Go,’ and I went.” In 1862, Brady shocked America by displaying his photographs of battlefield corpses from Antietam, posting a sign on the door of his New York gallery that read, “The Dead of Antietam.” This exhibition marked the first time most people witnessed the carnage of war. The New York Times said that Brady had brought “home to us the terrible reality and earnestness of war.” After the Civil War, Brady went bankrupt. He sold his entire collection to Congress for $25,000. He died penniless. (Pic credit: Library of Congress)