The Tale of Two Kings

Once upon a time, there were two brothers who would become kings.  Their father was King George V of  Great Britain, a grandson of Queen Victoria.  George had married Princess Victoria Mary of Teck.  “May” had been hand-picked to marry George’s older brother who died before the wedding.  At the end of their year of mourning, the couple became engaged and were married.  Although they had made a dynastic marriage, the couple were genuinely devoted to each other throughout their lives.

Two of their sons would become king.  Edward (the heir) was the older of the two.  Since his father had become King in 1910, it was clear that he would one day become King.  He had the advantage of being prepared for his eventual accession to the throne.  Unfortunately, throughout his life, he was had been associated with a succession of older, often married, women.

A few months into his reign in 1936, he proposed marriage to Wallis Simpson an American socialite who had divorced one husband and was in the process of divorcing her second.  Simpson, therefore, would have been ineligible to marry under the law of the Church of England which frowned on the remarriage of a divorced spouse when the other spouse remained alive.  This was especially true for a monarch.  Rather than force a constitutional crisis and the resignation of the government, Edward abdicated in December of 1936 so that he could marry his mistress.  “I have found it impossible to carry the heavy burden of responsibility and to discharge my duties as king as I would wish to do without the help and support of the woman I love.”

Edward reigned for 325 days and was never crowned. After his abdication, he was created the Duke of Windsor. He married Simpson in June of 1937 when her divorce became final.  They were assigned to diplomatic posts in France and Bermuda.  After World War II, he retired to France where he died in 1972.  He was buried in England behind the mausoleum of Victoria and Albert. Wallis survived him by 14 years and is buried beside him. 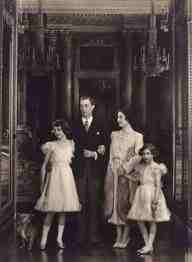 The second son (the spare) Albert (known as Bertie) became King as George VI. Not expected to inherit, he served in the Navy during WWI.  Albert fell in love with the Scottish Lady Elizabeth Bowes-Lyon and mounted a persistent courtship.  After two initial refusals, Lady Elizabeth accepted his proposal and they were married in 1923.

Albert was ill-prepared to reign but rose to the occasion and led the British people through WWII. He’d suffered from ill-health as a child, was fearful and tearful and wore splints for his knock knees, stuttered and-though left-handed- was forced to write with his right hand.  In 1925 after a particularly bad speaking engagement, the Duke began therapy with Lionel Logue, an Australian-born speech therapist. The Duke and Logue practiced breathing exercises and the Duchess practiced his speeches with him.  He eventually overcame his impediment.  The King, a heavy smoker, after several vascular problems developed lung cancer and died in 1952.  He was succeeded by his daughter Queen Elizabeth II who still reigns today.

King George’s relationship with Lionel Logue was the subject of the movie “The King’s Speech” starring Colin Firth which won four Oscars in 2011.