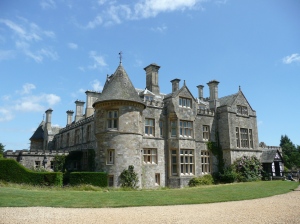 The Beaulieu Palace House is a 13th century house located in Beaulieu, Hampshire. It was originally built in the 13th century as the Great Gatehouse of Beaulieu Abbey and remains the ancestral home of a branch of the Montagu family since 1538, when it was granted to Thomas Wriothesley,1st Earl of Southampton to him by Henry VIII following the Dissolution of the Monasteries. Wriothesley also received Titchfield (see yesterday’s post). Tomorrow, An Author’s Desk   Rita Bay

The stately facade of Titchfield Abbey and the ruin it conceals. Titchfield Abbey is a medieval abbey and later country house of the Wriothesley family in Hampshire, England. The abbey was founded in 1222 for an austere order of priests. The inhabitants were devoted to scholarship, as shown by their very impressive library. Titchfield fell victim to the Dissolution in 1537 that was ordered by Henry VIII of England. Henry gave the building to Thomas Wriothesley, a powerful courtier who converted into a mansion. Later in the sixteenth century the abbey was home to Henry Wriothesley, who was a patron of William Shakespeare. In 1781 the abbey was abandoned and partially demolished to create a romantic ruin. It is now part of English Heritage. Tomorrow, Another Ruin  Rita Bay

The Architect of the Dissolution

Thomas Cromwell, 1st Earl of Essex (1485 – 1540), was a prominent English lawyer and statesman who worked his way through the ranks to chief minister to King Henry VIII of England from 1532 to 1540. Cromwell supported the English Reformation. He helped engineer an annulment of the King’s marriage to Catherine of Aragon, so that Henry could marry his mistress Anne Boleyn. Supremacy over the Church of England was officially declared by Parliament in 1534. In 1536 Cromwell supervised the Church from his posts of vice-regent in spirituals and vicar general. Through those positions, he organized visitations of England’s churches, monasteries, and clergy to conduct a census in 1535 to enable the government to tax church property more effectively. The information was actually used to close the smaller religious institutions and later the larger ones. The final abbey was closed the year of Cromwell’s death.

Cromwell’s rise to power made him many enemies, especially among the conservative faction at court. He was a protégé of Archbishop Cranmer but turned his back on his sponsor when he fell out of favor with Henry and was executed. Cromwell rose to power but fell from Henry’s favor after arranging the King’s marriage to a German princess, Anne of Cleves, in attempt to strengthen the Reformation. Henry was dissatisfied with her appearance and obtained an annulment after six months. Henry couldn’t behead a princess, so named Anne his dear sister. Anne was content to live her solitary life but was often at Court and helped raise the royal children.

Besides the problem with Anne of Cleves, Henry, uncomfortable with the Cromwell’s pushing further reformations, preferred the traditional services. Cromwell was subjected to a bill of attainder and executed for treason and heresy on Tower Hill in 1540. He was decapitated and his head placed on a pike on London Bridge. The King later expressed regret at having lost his minister but there were always others waiting in the wings.  Tomorrow, This Author’s Pen   Rita Bay

Dissolution of the Monasteries

The Dissolution of the Monasteries in England, Wales, and Ireland was the set of administrative and legal processes between 1536 and 1541 by which Henry VIII disbanded the religious institutions including monasteries, priories, convents and friaries. The Act of Supremacy, passed by Parliament in 1534 made King Henry Supreme Head of the Church in England and separated England from Papal authority. The First Suppression Act (1536) and the Second Suppression Act (1539) granted him the authority to appropriate their income and seize their assets.

Henry dissolved 625 monastic communities, most of which were more than 300 years old. The communities had been endowed by wealthy patrons with temporal incomes from donated estates to them and spiritual income from church tithes associated with the parish churches. In Henry’s time, the religious houses received about half of all religious income and owned a quarter of the nation’s land. After these communities were dissolved, Henry could seize their wealth and dispose of its land which gave him a huge source of income for his wars and his projects and a source of grants for his friends. Waltham Abbey in Essex  (pictured) was dissolved and demolished in 1540, the last working abbey or monastery to be dissolved as it was King Henry VIII’s  favorite place for resting and finding peace. Tomorrow, The Architect of the Dissolution. Rita Bay

Tagged as Dissolution of the Monasteries, Henry VIII