The Art of Surrender

In medieval times, part of the ritual of knighting was the awarding of the sword.  The sword, therefore, came to be the mark of an officer and a gentleman. Surrendering one’s sword became a token of submission.  It was also the custom to take an officer’s sword away from him and breaking the blade when he was dismissed from the service in disgrace.

When Cornwallis was defeated at Yorktown in October of 1781, the surrendering soldiers marched out of their fortification with colors folded, surrendered their arms at a predetermined location, then departed to detention; the British officers were allowed to keep their side arms and to depart to Britain or to a British-occupied American port; and the officers and soldiers were allowed to retain personal possessions. 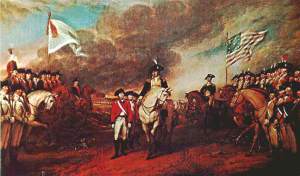 Surrender at Yorktown by Turnbull

On the day of surrender, in a breech of military etiquette, Cornwallis declined to attend the surrender ceremony, claiming illness. His second in command, Brigadier General Charles O’Hara, in an attempt to avoid the humiliation of turning over Cornwallis’ sword to Washington, attempted to present the token to General Rochambeau. The French commander refused to accept the sword and pointed to Washington. When O’Hara turned to make the presentation,Washington called on his second-in-command, General Benjamin Lincoln, to accept it. The defeated Brits were reported to march to surrender to the tune of “The World Turned Upside Down.”

If ponies rode men and grass ate cows,
And cats were chased into holes by the mouse . . .
If summer were spring and the other way round,
Then all the world would be upside down.

In Turnbull’s painting, General O’Hara is pictured. The French are lined up on the left and the Americans on the right.  Cornwallis is absent, pleading illness.