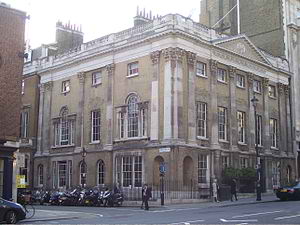 Brooks’s, a very exclusive men’s club located on St. James Street, was founded in 1778.  It was originally located in Pall Mall and was managed by William Almack of the Almack’s Assembly Rooms. He was succeeded by Brooks for whom the club was named. At the beginning of the 19th century, there was a limit of 450 members (550 during Regency times) with an annual subscription of 10 guineas and a five guinea entrance fee. It was a gathering place for the liberal Whigs.

The club was intended to provide a home away from home and wives, day or night. Simple meals were available. It was known for the high stakes gambling that took place there. Whist and hazard were the favorite games and gambling stakes could reach £10,000. The club maintained a betting book where bizarre bets could be placed. In 1978 Brook’s joined with the St. James’s Club.