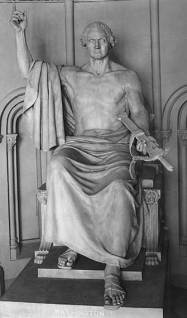 Have you ever seen George Washington like this? This 9-foot-high statue of George Washington was sculpted by Horatio Greenough in 1840 to celebrate the centennial of Washington’s birth. The statue was originally placed in the Capitol Rotunda but when the 30-ton statue cracked the floor it was moved outside and eventually landed in the American History Museum. The people of Washington hated the statue. The general consensus was that Washington should not be represented half-naked. The joke about Washington DC when the statue was first displayed was that the upraised hand represented Washington reaching for his clothes.

“Enthroned Washington” was based on the statue of the statue of the Zeus Olympus, one of the Seven Wonders of the World. The sheathed sword in his left hand with the hilt forward represents Washington surrendering power to the American people. The upraised hand with the two fingers extended generally symbolizes a benediction or blessing. The pointing finger can also symbolize the presence of God in Christian symbology.  Tomorrow, This Author’s Pen.  Rita Bay