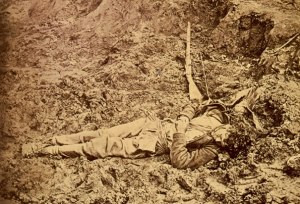 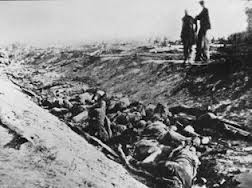 The Civil War resulted in the deaths of 600,000 – 850,000 deaths – more deaths than all other wars combined for over a century. These Civil War pictures were taken by the Brady crew. Not that it makes any difference but the  young man at top was a Confederate soldier killed at Sharpsburg, The soldiers in the bottom pic were killed at Antietam.  Burial was often in pits when deaths were in the thousands and tens of thousand. (Pic credit: Library of Congress)  Tomorrow, More Brady Pics.  Rita Bay

Tagged as Death in the Civil War, Mathew Brady