Elizabeth’s Journey to the Tower 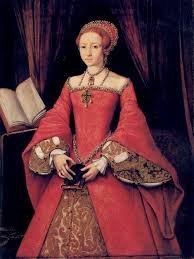 When Sir Thomas Wyatt led a rebellion in January 1554, he implicated Princess Elizabeth by writing a letter to her about overthrowing Queen Mary and place the Princess Elizabeth on the throne of England. The letter from Wyatt to Elizabeth and another one from an ambassador to the King of France were intercepted by Queen Mary’s people. Elizabeth who was probably innocent  but she was no fool.

Queen Mary summoned Elizabeth the thirty miles to London for questioning. Elizabeth became ill, probably from a recurring kidney disease, but Mary’s physicians pronounced her well enough to travel. Traveling only five miles per day, she was escorted to London by three of the queen’s councilors who were known to her. Elizabeth traveled in a litter with the curtains wide open, so that the people of London could see her innocent and frightened.face. She also had been reported to be pregnant, another rumor she wished to dispel. Her pallor was real. Besides being ill,  the route into London took her past the heads of Sir Thomas Wyatt and his accomplices which hung from spikes over London Bridge.

Although Queen Mary was in London, Elizabeth was not allowed to see her. Her household was dismissed and Elizabeth who was interrogated by Bishop Stephen Gardiner. When the interrogation was finished, Gardiner had Elizabeth sent to the Tower of London. Elizabeth, in her early twenties, was terrified because her own mother, Queen Anne Boleyn, had been imprisoned in the Tower and beheaded and buried there. Elizabeth was allowed to write her half-sister. The letter has survived and is known as The Tides Letter. Check out a pic of the young Elizabeth.

Tomorrow, Bits and pieces of the Tides Letter,  Rita Bay