Aphrodite: A Judgement of Paris 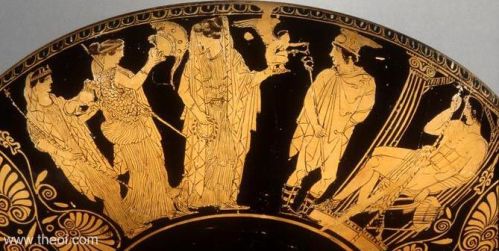 This Attic  red figure vase at Antikenmuseen in Berlin, Germany dates from the 5th century BC. Hermes (with the winged cap) leads the three goddesses Aphrodite (the figure in the middle), Athene and Hera to Paris for his judgement. The prize is a golden apple for the fairest. The Trojan prince sits in the doorway holding a royal staff and lyre. Before him stands Hermes, holding a kerykeion (herald’s wand) and wearing a chlamys (traveller’s cloak) and winged cap. Of the three goddesses, Aphrodite is veiled, and holds a winged Eros (god of love) and myrtle wreath in her hands; Athene holds a spear and helm; Hera is crowned and bears a miniature lion and royal lotus-tipped staff.
Tomorrow, more Aphrodite.