Category Archives: This Week in History 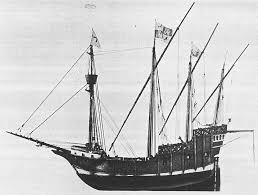 Nuestra Señora de Atocha (“Our Lady of Atocha”) was the most famous ship of a fleet of Spanish  twenty-eight ships caught in a late-summer hurricane in 1622. The ship, built in Havana in 1620, was a three-masted galleon of 500 tons constructed of mahogany. She was 113 feet long and carried twenty guns with a crew of one hundred and ten. The Atocha sank off the Florida Keys in approximately fifty-five feet of water, but was never located by the Spanish when they attempted to salvage the sunken fleet.

The ship, named for the parish of Atocha in Madrid, carried copper, silver, gold, tobacco, gems, jewels, jewelry, and indigo. The Atocha had remained in Veracruz longer than planned before rendezvousing in Havana with the vessels of the Tierra Firme (Mainland) Fleet. The treasure arriving by mule to Panama City had been so immense that it took 2 months to record and load the precious cargo. 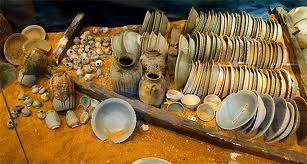 After more delays, the fleet, including the Atocha, left Havana on September 4th.  Two days out, the Atocha was driven by a severe hurricane onto the coral reefs off the Dry Tortugas – about thirty-five miles west of Key West.  With her hull badly damaged, the vessel sank quickly, drowning everyone on board except for three sailors and two slaves.

When the surviving ships reported the loss, the Spanish attempted to salvage the ships. Over ten years, the Spanish managed to retrieve about half the treasure from the Santa Magarita which had run aground. A second hurricane in October hampered salvage attempts by scattering the wreckage. The loss of the fleet forced Spain to borrow money and sell several galleons to finance the Thirty Years War. 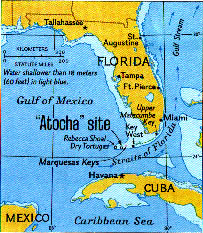 This Week in History the discovery of  Nuestra Señora de Atocha (“Our Lady of Atocha”) on July 20, 1985 is rivaled only by the King Tut’s treasure. Mel Fisher and his investors in Treasure Salvors had searched for the wreck for over sixteen years. Imagine the celebration when Mel’s son, Kane, radioed the news from the salvage boat Dauntless to Treasure Salvors headquarters on the Florida coast when the wreck was discovered.

Nuestra Señora de Atocha (“Our Lady of Atocha”) sank in 1622 off the Florida Keys while carrying an estimated $400,000,000 in treasure. In 1980 Fisher had salvaged part of the Atocha’s sister ship, Santa Margarita,  which had run aground in the same storm, but the Spanish had managed to salvage much of it already. The Spanish, however, had been unable to locate the Atocha with its treasure of silver, gold, and emeralds. 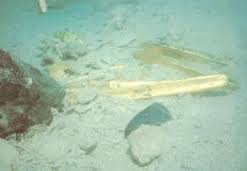 The professional divers were working for  minimum wage when they found the treasure which included stacks of silver bars, chests of silver coins, gold, jewels, and thousands of other unique artifacts from the Nuestra Senora de Atocha. The forty tons of salvaged coins, both gold and silver, were minted primarily between 1598 and 1621.

After the discovery, the Florida claimed title to the wreck and forced Fisher into a contract giving 25% of the found treasure to the state. After eight years of litigation, the U.S. Supreme Court ruled in favor of Fisher in July, 1992. 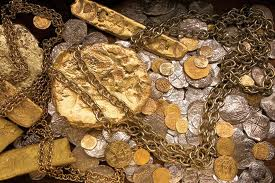 What now? The sterncastle, the part of the ship that would hold most of the gold and emeralds, is still missing from the shipwreck. These and other valuable items would have been stored in the Captain’s cabin for safekeeping in the rear part of the Atocha. In June 2011, Fisher treasure divers from found an antique emerald ring believed to be from the wreck of the Spanish ship. The ring is worth an estimated $500,000. The ring was found 35 miles from Key West with two silver spoons and other artifacts. Who knows what else lies beneath the waves?

This Week in History: The Storming of the Bastille & Bastille Day 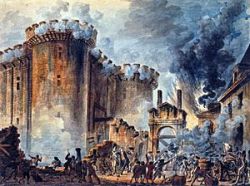 In 1789 King Louis the XVI of France initiated a series of events that ended in the fall of the French monarchy and the infamous Reign of Terror in which over 40,000 nobles, religious, and those generally on the wrong side of the leaders of French Revolution were killed – more than 16,000 by the dreaded guillotine. In my erotic Regency historical romance from Siren Publishing, Duchess in Waiting, Pierre, the innkeeper of Le Coq Cocorico (The Crowing Rooster) describes the situation to Devon Townsley, the Duke of Ralston, who has traveled incognito to Paris to rescue his fiancée and her friends from the turmoil in Paris: 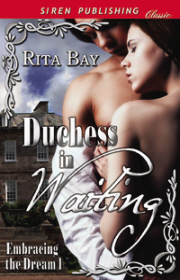 “Louis needed money. He called the Estates-General last month as he promised but the Third Estate rebelled once they convened. They wanted a constitution, not more taxes. At the end of last month, the Third Estate renamed itself the Communes and began setting up its own powers with a mind toward preparing to govern the nation. They call themselves the National Assembly of the People.”
“A coupe, then.”
Pierre gave a typical Gallic shrug. “Perhaps. Two weeks ago, Louis closed the Salle des États. Now they meet in the King’s tennis court. They have been joined by most of the clergy and some of the nobility. They pledged to continue meeting until they have adopted a constitution.”
“The King won’t take this lightly.”
“Perhaps. The royal party appears to surrender but the soldiers gather here and in Versailles. I’ve heard this from friends and seen it with my own eyes.” He spit on the floor. “None of this is good for business.”

On July 14, 1789, an irate Paris mob attacked the Bastille, a medieval fortress which served as a prison in Paris, that represented royal authority. Although the prison contained only seven inmates, it was a symbol of the monarchy’s abuses. Its fall and the resulting riots precipitated that French Revolution. Today,  Le quatorze juillet (14 July) is a public holiday in France. The holiday is called Bastille Day in English. To read an excerpt/buy of Duchess in Waiting. Click HERE

Tomorrow, History Discovered – Meet Rosalia, a mummy whose eyes are reported to open and close

Tagged as Bastille Day, Duchess in Waiting, Reign of Terror, Rita Bay, Storming of the Bastille 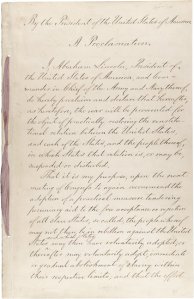 Today we celebrate an important day in American history that is usually ignored. On September 22, 1862, President Abraham Lincoln changed the course of history by issuing the PRELIMINARY Emancipation Proclamation. The proclamation announced that all slaves in territory that was still in rebellion as of January 1, 1863, would be free. By making the war about freeing the slaves, the Proclamation struck a blow against the Confederate States of America (CSA), particularly in Great Britain where the government was committed to the world-wide abolition of slavery. The CSA ignored the challenge, the war lasted another twenty months, and the slaves were freed.

An excerpt of the text (see pic) reads: “That on the first day of January in the year of our Lord, one thousand eight hundred and sixty-three, all persons held as slaves within any State, or designated part of a State, the people whereof shall then be in rebellion against the United States shall be then, thenceforward, and forever free; and the executive government of the United States, including the military and naval authority thereof, will recognize and maintain the freedom of such persons, and will do no act or acts to repress such persons, or any of them, in any efforts they may make for their actual freedom.” 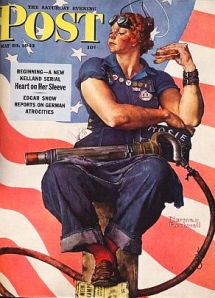 Today, I’m celebrating Labor Day by sharing an iconic picture and my recipe for potato salad for your Labor Day picnic. In 1943 “The Saturday Evening Post” featured Norman Rockwell’s version of “Rosie the Riveter.” The cover features a female worker with her foot resting on Hitler’s Mein Kampf. This and the “We Can Do It” poster which were intended to recruit women into the workforce in traditional male jobs became iconic symbols of the women’s and workplace rights movement of the 1970s-1980s. Check out the “We Can Do It” poster at Worlds of the Imagination.

Boil 8-10 medium potatoes with skin on until knife inserts easily.
Cool potatoes, then peel and cut into ½” pieces. Set aside.

Add above to dressing.
Pour mixture over potatoes and mix.
Salt and pepper to taste

Filed under Holiday Celebrations, This Week in History

The Battle of New Orleans 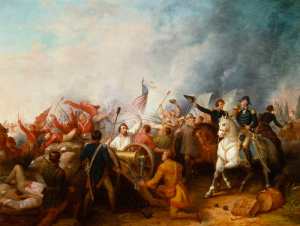 The Battle of New Orleans, the final major battle of the War of 1812, was fought on January 8, 1815 between British and American forces. The American forces commanded by Major General Andrew Jackson defeated an invading British Army commanded by General John Keane.that had wanted to seize New Orleans, the gateway to the vast Louisiana Purchase.  The British suffered 2,042 casualties: 291 killed, 1,267 wounded, and 484 captured or missing. The Americans had 71 casualties: 13 dead; 39 wounded and 19 missing.
The Treaty of Ghent that resolved the conflict between the Americans and Brits had been signed and ratified in December, 1814, the dispatches notifying the forces of an end to hostilities did not arrive until late February. Fortunately, for me and my ancestors, the British army was making preparations to attack my hometown of Mobile in Alabama when news arrived of the peace treaty. British forces had already attacked Fort Bowyer on the east side of Mobile Bay but withdrew when they were notified of the Truce. Check out the Dennis Malone Carter painting (1856) of the Battle of New Orleans. Tomorrow, General Jackson.  Rita Bay 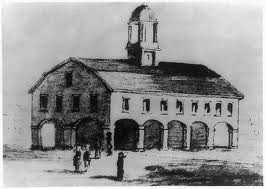 This Week in History Congress passed the Judiciary Act of 1789 which established the Supreme Court of United States. The Supreme Court which was established by Article 3 of the Constitution is one of the three bodies of government.  The size of the court was to be set by Congress.The Court, which has jurisdiction over the constitutionality of all law in the United States. was established as a tribunal of six justices who served until death or retirement.  President George Washington signed the bill into law and nominated John Blair, William Cushing, Robert Harrison, John Rutledge and James Wilson as Associate justices and John Jay as the Chief Justice.  All were approved by the Senate. The Court met for its first session in 1790 at the Royal Exchange Building in New York City.  By the end of the nineteenth century the number of justices on the Supreme Court was set at nine. 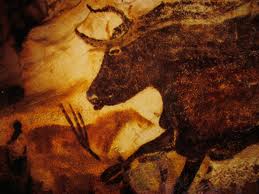 On September 12, 1940 near Montignac, France, a collection of prehistoric cave paintings was discovered by four teenagers while chasing their dog down a narrow entrance into a cavern. The 15,000- to 17,000-year-old paintings, consisting mostly of animal representations, are among the finest examples of art from the Upper Paleolithic period.

The Lascaux grotto’s main cavern is 66 feet wide and 16 feet high. The walls of the cavern are decorated with  600+painted and drawn animals and symbols and nearly 1,500 engravings. Animals depicted include horses, red deer, stags, bovines, felines, and what appear to be mythical creatures. There is only one human figure depicted in the cave: a bird-headed man with an erect phallus. Archaeologists believe that the cave was used over a long period of time as a center for hunting and religious rites. The cavern is now closed to visitors because of degradation of the paintings.    Rita Bay

This Week in History: Uncle Sam 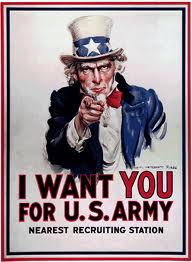 This week in 1813 the United States government adopted the nickname “Uncle Sam.” Samuel Wilson, a meat packer in Troy, NY stamped barrels of supplies sent to soldiers in the War of 1812 “US.” The soldiers began calling the supplies “Uncle Sam’s.” In 1860 American cartoonist Thomas Nast popularized the white-bearded, stars-and-stripes clad figure we know today. During World War I, James Montgomery Flagg used his own likeness to create Uncle Sam, adding age and the white goatee to create the iconic recruitment poster. The poster was reissued in World War II.