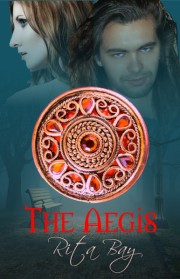 Melinda Kildare, antiquarian and rare book dealer extraordinaire, returns to her shop after an estate sale with a massive, sealed barrel. Too late, she discovers that the Aegis medallion that traps her head-first in the bottom of the barrel is the bait used by a family of vampires to capture and enslave women of power.

Light Warrior Damian Sinclair who has battled the Dark Ones for centuries answers Melinda’s call—the Call of a lifemate. While protecting her from the Dark Ones who pursue her relentlessly, he introduces her to passion, love, and her heritage as a Shield Bearer of the Light.

Will they find happiness as they unite to fight the Dark Ones or fall victims to the Dark forces ranged against them?

Melinda Kildare kicked back in her favorite bergère chair, sipped her Chablis, and eyed the chest-high barrel at the back of her shop. The eccentric heir at the estate sale this morning had encouraged her to bid on the lot. Several hours of exhausting work had yielded no treasures, but she would finish the job before retiring to her apartment upstairs. Alone, as usual.

She snorted. A girl doesn’t find her knight in shining armor crawling among stacks of musty boxes at yard sales or delving in dusty barrels in crumbling mansions, and men don’t fall for an over-educated antiquarian who backs out on dates to build her business. She sighed, gulped down the last of the wine, rubbed her arm, and forced herself back to work.

Near the bottom of the barrel, she spotted a leather-bound book embossed with an intriguing medallion. The familiar rush at the prospect of a new find overwhelmed her usual caution. She stood tip-toe on the stepladder and reached to retrieve the book. Her fingertips brushed the medallion, a light flashed bright red, and a jolt blasted up her arm. Startled, she tumbled face-first into the barrel.

She shifted to tip the barrel over, lost her balance, and fell back to the bottom, wedging her shoulder against the side. Wincing with pain, she stretched to hook her legs over the rim, slipped, and landed hard with a nauseating thud.

Time to regroup. She took a deep breath, then exhaled forcefully. The deliverymen had braced the heavy barrel in a corner, even wedged blocks at the base to make it more stable. Her cell was charging on her dresser upstairs, the shop phone was in the showroom. Her only neighbor had closed his shop and left for home hours ago. She was stuck, head-down, legs waving in the air, with no prospect for rescue.

Damian Sinclair savored the last of his rare filet of bison at the $10,000-a-plate benefit for the victims of the world’s latest natural disaster. He enjoyed dining in the Pool Room at the Four Seasons Restaurant when he was in Manhattan. The marble elegance and outstanding service reminded him of his past when waiters catered to their guests.

Accepting the invitation to the event, though, had been a mistake. He’d already dodged several men who wanted to talk business and a half-dozen women who’d made more personal propositions. He grimaced at the inane chatter of the nearby guests. Perhaps he’d finish the main course, make his apologies, write a substantial check and…The Call sounded.

Struggling to maintain his composure, he tossed his napkin aside and rushed to the men’s room. It was no surprise when the shift that would transport him to his lifemate came. He’d known what to expect for centuries.

In an instant, he stood outside an antique shop on a brick-paved street where the wrought iron-trimmed porches overhung the sidewalks–probably New   Orleans. The gold lettering on the glass of the door read Antiques & Curiosities, LLC, Melinda Kildare, Proprietress. Wherever he was, he was not alone. He could sense his lifemate and she was in distress. He reached out to her and saw only darkness. He admired  the vast power that she would wield as a Shield Warrior of the Gramail Aegis. He knocked and waited for the invitation he needed to enter. He extended his senses into the shop and then heard her, barely a whisper.

He opened the door and called, “May I come in?”

He quickly navigated the conglomeration of treasures and trash in Melinda’s shop, anxious for a first glimpse of his lifemate. He spotted her in the storeroom at the back of the shop surrounded by stacks of books. He stopped dead and stared. In all his years, he’d never seen such a sight.

His lifemate was sprawled upside down in a massive barrel, her bare legs waving in the air. He stepped closer. A brown silk skirt covered her face. Below her waist, she wore a black V-string, a mere wisp of shiny satin that revealed far more than it covered. He admired her long, shapely legs and firm bottom, then shifted a little for a better view. He grinned–his lifemate was a natural redhead. “You seem to be in a bit of trouble.”

“Don’t just stand there. Get me out of here.”

He stole a final peek, reached in the barrel, and grasped her around the waist. Heat sizzled between them as he lifted her out of the barrel and set her on her feet with her back to him. Her auburn hair fell almost to her waist in a tumbled mass of crinkled waves. Like most of the Light, she was a pale beauty of Celtic descent.

She turned toward him, her fair face flushed, her leaf green eyes burning with anger. Her sleeveless, scoop-necked black silk shell caressed her generous breasts, except where she cradled the book with the Aegis medallion. The skirt clung to the curves that he already knew well.

She cleared her throat to interrupt his perusal and gestured toward the front of the shop. “Thank you for your assistance. The shop is closed for the day. I’ll see you out.”

She thought to show him the door. He would never leave her, though he must tread carefully–women today were so independent. But he knew her kind–curiosity could be their downfall. “No, Melinda. Please. I’m Damian Sinclair.” He bowed deeply in the old-fashioned style that never failed to impress the ladies. “I suspect you have acquired a stone from a Gramail Aegis.”

She eyed him intently, her interest piqued. “How do you know my name and what’s a Gramail Aegis?”