Author Susanne Matthews is this Sunday’s guest at “An Author’s Desk.” She writes romance/suspense with and without paranormal elements, contemporary romance, and historical romance and is published with Crimson Romance, Secret Cravings Publishing, Solstice Publishing, and Anaiah Press. Susanne is a prolific writer who will share a bit of her writing routine and her latest release (On His Watch, her third romance suspense novel published with Crimson Romance). Meet Susanne …

Although I’ve only been writing since September 2012, I have sold ten novels, six of which are currently available. Three others will be released by Christmas, with another in May of 2015. I’m currently working on a YA novel as well as a chapter book for kids in grades 2-5. In addition, I co-author contemporary romance novels under the name Misty Matthews with a gal who lives about 1500 miles away from me. We’ve never met, and have spoken on the phone twice. Everything we do is done online and through the Internet. It’s definitely a 21st century partnership. We have a novella available now and a novel due out in October. Coming Home is the first book in a four book series called Taking a Chance on Love.

Hello. I’m pleased to have been asked to share information about where and how I write with you. 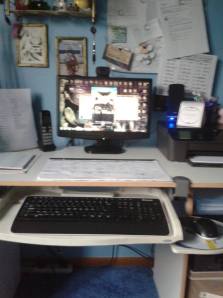 Unlike many authors who have to juggle a part-time or full-time job along with their writing, I’m retired with as much time on my hands to write as I like. I have a home office all to myself where I can shut out the rest of the world and focus on my writing. I prefer using a desktop computer, although I do have a laptop which I use when I travel. I work in as quiet an environment as I can get. As I write I use a screen reader to reread the work to me. That way, I can catch the awkward sounding sentences, over-used words, etc. Although the system isn’t perfect, I can’t imagine working without it.

I tend to research my story thoroughly before and during the writing of a particular manuscript. Sometimes, I’ll come across an interesting fact I hadn’t known and I’ll incorporate it into the story somehow. I’ll print out information occasionally, but most of the time I’ll save the information in a folder and retrieve it as necessary. At other times. I’ll bookmark specific links. It like being able to use my research in different books. For example, the information I learned about fire for my novel Fire Angel, has proven useful in two other novels: In Plain Sight and Coming Home.

While I have a phone on my desk, I rarely answer it especially if I’m deep into my edits or my characters are taking me on a new journey. I use a note book to keep track of POV, word count per chapter and number of pages per chapter since these things change according to the publisher’s needs. It helps me keep the stories balanced. If I hit writer’s block, I turn to a friend. I’m usually connected to my chat lines, but I’m good at ignoring them if I have to. One of the first things I do each day is check my emails and my calendar. I blog regularly and host other writers as well, so I need to stay on top of who’s where when.

I can write at any time of day, and other than family and church obligations, my time is my own. I’ve been known to burn the midnight oil getting the last of the edits done. Most days, I’m at the computer by eight. How long I write is directly related to where I am in a project. I’m fortunate enough to be able to stay focused when I’m editing. I’ve been known to put in 16 hour days—not even breaking for lunch—when the muse has me, but most of the time I write for 6-8 hours a day.

I’m a pantser, which is actually quite ironic since as an English teacher I insisted on plot graphs, character sketches, and the whole nine yards. When I decided to try my hand at writing, I simply started keyboarding. The story comes out of my fingers. I have no idea what’s going to happen next. The characters are real to me, and they direct the story. I suffer with them, grieve with them, and of course rejoice when everything works out at the end. I’ve been known to torture them if someone in my real life annoys me too. Venting inside a fictitious world is a lot safer and surprisingly just as effective. Plus, I never have to eat my words or apologize to any of my characters no matter how badly I treat them.

I don’t write a story from start to finish as one draft. Instead, I add and create it bit by bit. I’m a linear thinker. A has to come before B, but if I have a brainwave, I’ll make a note to remind me of it later. My writing is a lot like building a wall. I’ll create a paragraph, go over it, add details, and then move along. I’ll save the work at the end of the day. The next morning, I’ll go back to the previous day’s work, revise, edit, and add to it until it’s doubled in size until the story is complete. As the story moves past the first chapter, I’ll start my writing day by reviewing the two last chapters I’ve written. This helps situate me in the story again and get the creative juices flowing. Sometimes I’ll move chapters around, add a chapter before the one I started with or I’ll add one between chapters. I constantly make sure that suitable clues have been planted as I move along—go back to verify details, and make sure that every issue is believable and resolved in a satisfactory way by the end of the story. Character names can change throughout a story if I come across a name I prefer or if I think similar names are needed or need to be avoided. One fact is consistent in all my work. The title of the book is always found somewhere in the narrative or dialogue in the story.

And there you have the story of this author’s desk. 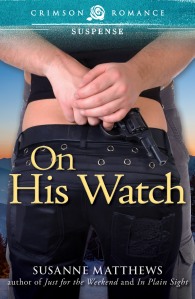 What starts as a quiet evening alone watching football turns into the night from hell for FBI agent Jason Spark, who is covering sheriff duties for his honeymooning brother. He thought the 911 call was a butt dial but instead stepped into a bloodbath, complete with writing on the wall. It’s a scene straight out of a slasher movie—a dead physician, his son, and his wife so badly beaten, it’ll be a miracle if Nikki Hart survives.

When Nikki Hart awakes from a coma, she’s terrified. She doesn’t know her name, recognize her face, or remember anything about herself and her past. She clings to the memory of the angel who comforted her in her darkest moments, but no one in the world she wakes up in resembles the good guy.

Evidence in the case leads Jason to The Butcher, a hired assassin usually contracted by the Sicilian mob, a man who doesn’t quit until the job’s done. News of Nikki’s recovery puts her in the killer’s sights again. Jason will do whatever it takes to protect the woman he’s learning to love. But can he save her from a vicious killer intent on earning his million dollar fee and his employer bent on revenge?

And when the smoke clears, can Nikki ever forgive the secret role he played in her injuries?

On His Watch Buy Link

Filed under An Author's Desk

Tagged as An Author's Desk, Crimson Romance, On Demand, On His Watch, Susanne Matthews