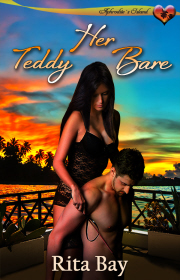 Love and lust, the perfect mix for a happily ever after. When popular artist Diana Harper dumped her cheating fiancé and accepted an invitation “to attend a private event at Miss A’s island retreat to experience your most secret dreams and fondest fantasies,” her hostess gave her Teddy as an “attendant.” Despite his best efforts, Teddy is no submissive. Diana, however, plays his game for the profound passion, the best sex ever, and love that could last a lifetime.

Billionaire philanthropist Theodore Cooper “Coop” Bareston III fell in love with Diana when he saw her working out at his elite gym in New York City. He was willing to do anything to win her love, including wearing a skimpy thong in his “Teddy” role and posing nude in chains when Di’s interest in her art revived. As the sexual tension builds and passions explode, Teddy discovers he is intensely aroused by  playing the submissive to his Di’s domme.

After moving into Coop’s East Side penthouse, Diana is sucked into a world inhabited by supernatural denizens with powers beyond her imagination. Can she survive the challenges confronting her to live in Coop’s world or will she turn her back on the extraordinary destiny within her grasp?