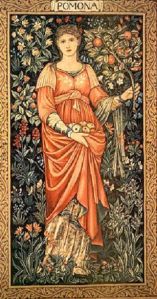 When the Romans invaded Britain in 55 BCE, they brought with them the Roman festival of Pomona, the goddess of orchards and gardens. She was portrayed as a beautiful maiden carrying fruit and nuts or a cornucopia and crowned with apples. Her harvest festival merged with the Celtic festival of Samhain (summer’s end) and the later Christian feasts of All Soul’s Day and All Saint’s Day and celebrated as Halloween. A 17th century Christian description turns Pomona into an “Angel” who presided over the harvest of fruit and nuts. This description of Pomona is reflected in the art of the period.

The origins of the Halloween celebrations stem from several pagan traditions. The Celts believed that during Samhain spirits of the dead walked among the living. The living wore ghoulish costumes to keep away the unwanted spirits. Earliest stories had Druids in costume leading parades to keep the spirits away from the villages. The apples associated the celebration of Pomona’s festival were the origins of “bobbing” for apples where the first unmarried man or woman to bite the apple would be the next to marry and also the tradition of young women peeling an apple and tossing the peel over their shoulders to see the name of their future husband written in the peel.

An ancient drink was associated with Pomona’s festival and the Celtic pagan celebration of la mas ubal, the day of the apple fruit. The word was pronounced “lamasool,” but was later corrupted to Lambs’ Wool. The drink was a frothy mixture of warmed spiced and sweetened ale and roasted apples. The drink later became associated with Wassail and the Twelfth Night of Christmas, but its pagan origins are evident in the descriptions of Wassailing.
Even though it’s January, wassailers with their lambswool in hand paraded into the orchards with lighted torches beating posts and pans with wooden spoons. They beat the trunks of the trees and splashed the trunks of the apple trees with lambswool to drive off the spirits of the old year and bless the area. The wassail chants for the apple trees were:

So what is this “Lambs’ wool” drink with pagan origins in Halloween that ended up as a Christmas tradition? Descriptions of its preparation are pretty standard across the centuries, though later recipes allowed the substitution of cider for ale and sugar replaced honey which was used as an early sweetener. Robert Herrick in 1648 wrote a poem about Lambs’ wool:

Next crown a bowl full
With gentle lamb’s wool:
Add sugar, nutmeg, and ginger,
With store of ale too;
And thus ye must do
To make the wassail a swinger.

One rather nebulous recipe from the 19th century read: “To one quart of strong hot ale add the pulp of six roasted apples, together with a small quantity of grated nutmeg and ginger, with a sufficient quantity of raw sugar to sweeten it; stir the mixture assiduously, and let it be served hot.”

Here’s a recipe that I converted from English measures that worked well: 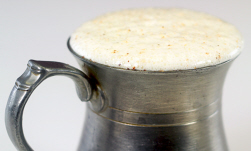 Preheat the oven 250 F. Fully Core six apples and place 2″ apart on a lightly greased baking sheet and bake until very soft, about an hour. Remove from oven and cool for 10 minutes. Discard peel and mash apple to a smooth puree (no lumps) while warm. Set aside.

Add sugar to large pot and cover with ale. Heat to dissolve. Add ginger and nutmeg. Stir. While keeping the pan on a gentle simmer, slowly add in the rest of the ale. Heat for 10 minutes.

Add apple mixture to the ale, mixing it with a whisk. Heat for 30 minutes. Whisk again for a couple of minutes (or use a stick blender) to form a froth. Pour into bowl or heat-resistant mug and serve hot.

How did it taste? Rather bitter, but spicy. Ale-lovers would have a real treat, though. It was also labor intensive and not quite as foamy as I imagined. The pic is not of mine. Like I said, not enough foam.