Misconceptions about Washington, The Revolution and the Constitution

NOTE:  I’m blogging today at  The Writers Vineyard on Avoiding the Dreaded Anachronism, my search for accuracy while researching settings for Amazona, a story about a Pictish Princess who bargains with a Roman nobleman for help in searching for her kidnapped brother. You can check it out at http://thewritersvineyard.com/ 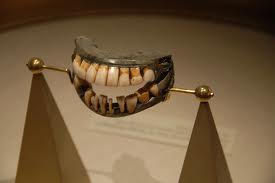 George Washington did not have wooden teeth. According to a study of Washington’s four known dentures by a forensic anthropologist from the University of Pittsburgh (in collaboration with the National Museum of Dentistry, itself associated with the Smithsonian Museum), the dentures were made of gold, hippopotamus ivory, lead, and human and animal teeth (including horse and donkey teeth).

The signing of the United States Declaration of Independence did not occur on July 4, 1776. The final language of the document was approved by the Second Continental Congress on that date, it was printed and distributed on July 4 and 5, but the actual signing occurred on August 2, 1776.

The United States Constitution was written on parchment, not hemp paper.

Tagged as Declaration of Independence, George Washington's Dentures, US Constitution