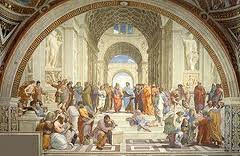 Western philosophy is based on the early Greek philosophers, especially Socrates as told by Plato. Socrates was so influential that all Greek philosophy prior to him is called Pre-Socratic. The single most important concept of the pre-Socratic philosophers was the emphasis on reason as opposed to myth. Thales of Miletus was called the first philosopher by Aristotle.  Scientific study  and the study of knowledge were components of philosophy.

Classical Greek Philosophy originated in the 5th century BC centered in Athens which was a center of learning for math, science, and philosophy.  The statesman Pericles supported the philosophers.  The conservatives in Athens, however, did not.  Several were forced to flee after being accused and having their work destroyed.  Socrates was tried and executed by those conservatives.

Socrates introduced philosophy to the public at large.   He introduced the Socratic method which used a question and answer method of discourse to examine various issues. Socrates taught that no one desires what is bad, and so if anyone does something that truly is bad it must be unwillingly or out of ignorance; consequently, all virtue is knowledge. Subsequent philosophical movements were inspired by Socrates or his young associates. 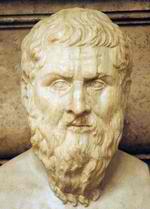 Plato was an Athenian who was a student of Socrates. Plato, the primary source about Socrates, wrote a series of “dialogues” and letters about Plato. Plato, as the author of The Republic, suggested that there will not be justice in cities unless they are ruled by philosopher kings; those responsible for enforcing the laws are compelled to hold their women, children, and property in common; and the individual is taught to pursue the common good through myths that he called noble laws.

Aristotle was the last of the classical Greek trio of philosophers. He enrolled in Plato’s Academy.  He left Athensand became the Alexander the Great’s tutor. He later returned to Athensand founded his own school, the Lyceum.  Aristotle disagreed with Plato extensively in general focusing on the importance of empirical and practical concerns. The Romans embraced Greek philosophy around the 2nd century BC and later developed their own schools of philosophy. More about them another day.