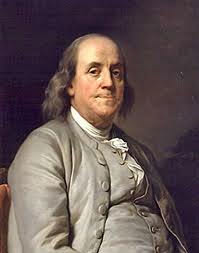 Benjamin Franklin (1706-1790) was called the “The First American” because he was such a strong advocate for uniting the colonies.  He created the first political cartoon and published it in his newspaper.  Franklin was a multi-tasker.  He was an author, ambassador, diplomat, statesman, printer, scientist, and postmaster.  He invented bifocals, the Franklin stove, an odometer for carriages, daylight savings time and the lightning rod.  He also started the first public library in the US and the first fire department.  He published an almanac that included loads of data, advice, and witty wisdom.  Some of his witticisms are listed below with a few of his letters.

Our new Constitution is now established, and has an appearance that promises permanency; but in the world nothing can be said to be certain except death and taxes.           Letter to Jean-Baptiste Leroy [Nov. 13, 1789]

Early to bed and early to rise, makes a man healthy, wealthy, and wise.

Three may keep a secret, if two of them are dead.

He that lieth down with Dogs, shall rise up with Fleas.

Keep thy shop, and thy shop will keep thee.

Experience keeps a dear school, but fools will learn in no other.

Love your Neighbour; yet don’t pull down your Hedge.

Glass,China, and Reputation, are easily crack’d, and never well mended.

The sleeping Fox catches no poultry. Up! up!

If you would not be forgotten
As soon as you are dead and rotten,
Either write things worthy reading,
Or do things worth the writing.