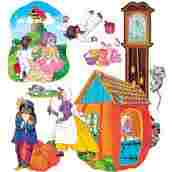 English rhymes that we would recognize today date back to the fourteenth century.  When free speech was frowned upon or punished severely, a nursery rhyme could innocently comment on or condemn real royal and political events and people.  Generally, rhymes associate words with similar sounds using a rhyming couplet or short verse. Rhymes are often short and easy to remember, so they could be shared easily.

One of the oldest rhymes relates to the aftermath of the Black plague.  About one-third of the population of England had died from the plague that 1350.  Some of those who survived moved to the cities where they pursued various trades (the birth of the middle class).  Those peasants who remained realized the value of their work.  The following poem embodied their belief:

When Adam delved* and Eve span**

Who was then a gentleman?

Other rhymes referred to more grisly doings.  For example,

Ring around the rosy
A pocketful of posies
“Ashes, Ashes”
We all fall down

Mary Mary quite contrary,
How does your garden grow?
With silver bells and cockle shells
And pretty maids all in a row