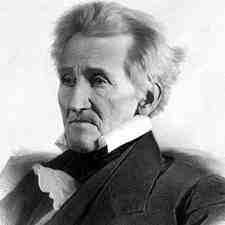 Numerous photographs of Andrew Jackson survive in the form of daguerreotypes.  Can’t say that he was the FIRST US president who was photographed because John Quincy Adams, the 6th US president, has that honor.

The daguerreotype was a photographic process available for public use in the late1830s.  Developed by Louis Daguerre together with Joseph Nicéphore Niépce, the image in a daguerreotype is formed by the amalgam, or alloy, of mercury and silver.  The image is formed on the surface of the silver plate that looks like a mirror.

Daguerreotype photography spread rapidly across the United States. In the early 1840s, the invention was introduced in a period of months to practitioners in the United States by Samuel Morse, the inventor of the telegraph code. A flourishing market in portraiture sprang up, predominantly the work of itinerant practitioners who traveled from town to town. For the first time in history, people could obtain an exact likeness of themselves or their loved ones for a modest cost, making portrait photographs extremely popular for the masses.

Tomorrow, Jackson’s warning to Americans in his Farewell address